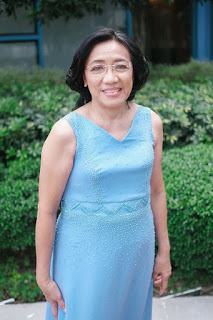 My mom is an example of a genuinely nice person who is always misunderstood – as in no one really understands her.

I have endless stories of how she drives my dad, my sister, my brother and me crazy with her comments, complaints, and decisions that I feel like if Jokoy and I switched moms, he’d be a bigger star than he is.

Here’s a quick conversation my sister had with her recently:

Sis: I’ll just send this package to my friend because I can’t deliver it personally.

Mom: Why? The delivery might be more expensive than the package! You have so much cash now that you’d rather just spend money on having it delivered than go by yourself?

Sis: My son is being difficult right now, and besides, she’s the one paying for the delivery fee.

Mom: Isn’t it embarrassing to your friend? What if I just pay for it?

Like a typical mom, there is no right or wrong answer to any of her questions – she will have a comment on just about anything you would say.

She would often complain about having no money, but she’ll insist on buying (and actually buying) an irrationally expensive version of what you are looking for.

My mom cares too much about what people think. She will never admit to it, but she does.

However, she can be a bit tactless at times, speaking thoughtlessly with what she presumes are light-natured jokes, but may actually be a little bit offensive to someone, thus creating an uncomfortable atmosphere.

Case in point: at my brother’s wedding, his would-be-bride was a bit late, something that would not be so surprising considering she was hands-on about everything, opting not to get a wedding coordinator.

After five minutes past the invitation time, my mom kept joking to the bride’s parents that it seems she’s going to be a runaway bride because she isn’t there yet. (I called her out after blurting out the same joke three times, and she was wondering why I did.)

At times, she will care too much that it will make you uncomfortable to the point of irritation.

She makes a fuss about the smallest things and will hold a grudge forever – she has never once joined her high school reunion particularly because she didn’t like this one person from her batch, so believe me when I say that if you did something against her at some point in your life, she may not have forgiven you just yet.

She is not perfect, but I do love her, which led me to write this.

See, my mom, for all her quirks, is really just a genuinely nice person.

She’s the type to make sure that we have clothes that fit right even if she will update her own wardrobe once every decade, extend our allowances in the middle of the week if we run out of money so that we can eat properly despite not doing the same for herself, and makes sure that there is always food on the table for whatever time anyone wakes up or goes home.

Outside of our own family, she would volunteer herself to help someone who needs something done, at times even if it’s out of the way. She would always thought of the well-being of others before she thought about herself.

She raised us up with the goal of making us turn out to be good people. Some of the things she instilled in us are the habit of not borrowing money so that we won’t be a bother to anyone, the mindset of making sure to bring something over when we’re invited to someone else’s home, and never trampling on any person to gain an advantage in life.

And yet, despite her good nature, all she gets is self-pity.

At 66 years old, this woman still travels at least two hours from Cainta to Binondo to work in the office that she has gone to for over 40 years now, and endures the evening rush to go back home from Monday to Saturday.

She can’t retire because she worries too much about what happens when she’s no longer working, and she has no concept of relaxing or taking a break, so it would be a nightmare for her to wake up one day and not have to do what she has been doing for more than two decades.

She has no social life, no hobbies, and spends her free time either playing games on her tablet or watching Tulfo.

Her one actual friend is one of the few people (apart from family) who I sincerely believe cares for her with no ulterior motives.

It’s easy to ridicule and laugh at her missteps, but not a lot of people really know what she has gone through, and I’m taking the chance to write this.

I have this uncle who everyone also laughed at because of his amazingly unlucky hand in gambling, but he can’t stop doing it. Earlier in the millennium, we lost him because of an unbelievably stupid case of mistaken identity.

At his wake, people came and shared how much of a good person my uncle was.

I don’t want that to happen to my mom.

I don’t want people telling me how much they appreciate my mom “when she lived” because no one seems to appreciate her now that she is living.

For most of her life, she has worried about others that she would forget about taking care of herself.

This is woman is genuinely a gift to mankind despite her imperfections, and she deserves better than self-pity.

So when all these lockdowns are over and you get a chance to meet her, I hope that you could give her a genuine smile or do something nice for her so that she would feel that love could extend beyond her family.